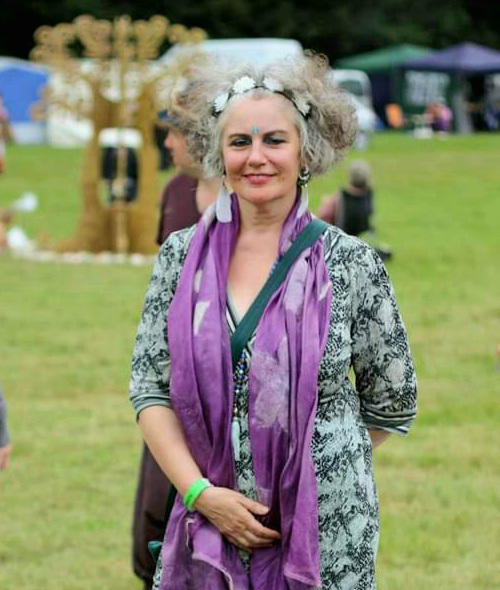 Candida Valentino is a multi disciplined artist, she trained originally in visual arts and theatre design and then in her early 30's she discovered the world of Sound Healing, Mindfulness meditation, movement through Qigong and Yoga and other spiritual practices such as Kriya and Pranayama breathing and Kabbalah journeying

In 1996 she also started to travel more and went to Kerala in South India with her Kaballah teacher where she was introduced to the healing medicine of Ayurveda and Panchakarma treatments. She was so impressed with her own healing experience she went back over several years to study Chavutti Thirumal a specialist treatment developed by the Kalari Payattu warriors. She had amazing teachers Indira Pillai and Vinay Kumar who imparted their ancient knowledge and techniques. Candida continues a to practice still after 25 years and give this treatment now in Frome in Somerset.

She formed Soundtransformations with Michael Ormiston in 2000 , they travelled to many countries around the world giving workshops and courses that promoted the value and benefits of sound healing, using the voice, Singing bowls, Gongs and drums.

As Candida's original passion in her art, she has been fortunate to study many traditional art techniques by attending outreach workshops at The Prince's Foundation in London, from Sacred Geometry, Paubha painting from The Buddhist tradition, making paints from minerals and plants and Sacred Geometry paper folding.

Candida went on to specialise in using her voice in the art of Khöömii (overtone singing) and Khargyraa (undertone singing) which comes from the West part of Mongolia and Tuva, having studied with her Mongolian teacher Tserendavaa. She was blessed to teach Mongolian Khöömii singing with her partner Michael Ormiston, and have developed courses that have been taught regularly at the summer school at SOAS as well as in Europe and UK.

In 2014 she attended and passed her 200hr Yoga Teacher training at Yogacampus in Islington London and In 2016 she was one of the first students to attend Nikki Slade's Learn to Lead Kirtan 200hr training.

She has collaborated on many recording and albums with Michael as well as other artists, as well as live performances and festivals. The past few years was a blessing to be able to perform and work with The Tashi Lunpho monks who are based in South India near Bangalore. Creating a unique collaboration together for two years running they were well received at many venues in the UK

Currently she is making her own beautiful mandala creations, making them into cards and prints as well as selling original artwork. You can see her work on this website or at Mandalawoman on Facebook

, another channel which promotes Qigong practices and Vocal and Body work.